Umwelt has enjoyed a career delivering dark techno for over two decades, anchoring his sound in heavy TR-808 use. Days of Dissent is a further honing of sounds explored on this year’s earlier Cultures of Resistance. While not a complete divergence, there is nothing as experimental as Resistance‘s short “Realm of Chaos” or the apocalyptic, minimal “Realm of Chaos” on Dissent.

Throughout the eight tracks, the 303’s bass is minimized, often in favor of a duo of synth sounds a few octaves apart to provide melody and accompaniment. The title track is a kick-dominated banger populated with distorted claps and snare rush shuffles. The murmur of a melody appears a minute in, and this swells until it is agitated by a foreboding pad in the background. Though the sound is unsettling, the synths move along a major progression, which creates a sense of magnitude. It’s most similar to “Subterranean Bases” on Resistance, a reworking and amplification of what makes that track work: a driving beat, punctuated with snares; an ominous witch house-style synth underneath; and omnipresent treble, here permitted to sing, whereas on “Bases” it’s choked out.

Distortion is used tastefully throughout Days, which requires a certain discipline when creating hostile music. It’s simply too easy to blast everything through with a dose of fuzz. Instead, Umwelt reserves the effect for select instruments on just a few tracks. Witness this in “Revolt’s” use of torn, filtered snares, where a detuned, high-register synth creates an unbalanced atmosphere, paired with an growling sawtooth in the lower octaves. “Company of Lies” features a similar strategy, where the despondent treble is cradled between the distorted, panned percussion.

“Non Conformity’s” percussion is brutally compressed as to nearly clip it out, creating the perception of distortion. A withered lead synth further accents the outcome. “Citadel of the Chaos” withholds the beat for over three minutes, letting an arpeggiated synth adjust its parameters as its low-end brother anchors the groove with a simple whole note progression. If the title track becomes epic by its apex, “Factory of Death” is its brooding counterpoint. It runs at only a slightly slower tempo, but that makes all the difference in a track that is also more sparse. Blip effects dance around synth whole notes, adding gravitas to each downbeat.

“World Shatters” uses cheesy slow-attack strings before a crisp techno arrangement bubbles to the surface, again underscored by a menacing bass lurking in the depths of the mix. A thin chorus patch arrives a minute later over the top of it all, held together by straight Roland rhythm box sounds. The album winds down with a languid synth line and more involved percussion filling out the space on “End of Light” – as if there was any doubt.

Days of Dissent will be available via Killekill on vinyl on 10/17 and digitally on 10/31, just in time for Halloween. In the meantime, stream Umwelt’s recent set for LYL Radio: 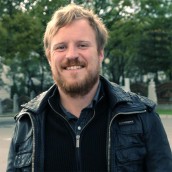