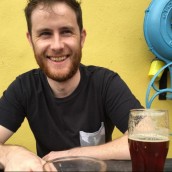 Oisín Hayes, the co-founder of Subrewind. His pasts includes running a successful clubnight in the heart of Dublin which featured artists such as Emalkay, High Rankin & Joker. Oisin was one of the first people to begin hosting dubstep gigs in Dublin, it received an overwhelming response and each event was at its full capacity. His main interests lie in the likes of grime, dubstep, UK Funky and UK Garage.